I recently saw the trailer for Branded. A film that seems to be a conspiracy theory on acid. The premise of the film is simple, the human race have a code in their minds that makes them susceptible to advertising. Oh yeah, and also there are loads of messed up CGI demon things flying around. I’m kind of hoping this film is really some kind of dark comedy as I clocked Arrested Developments Jeffrey Tambor looking rather serious for once (he will always be George Bluth Snr to me). 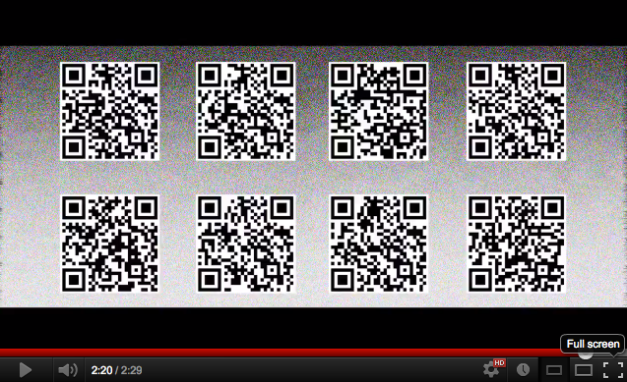 Anyway the use of the QR codes is what mostly interested me about this trailer.

There seems to be around 40 odd different QR codes in the trailer, which is a hell of a lot for a 2min 30secs trailer. As part of my masters last year I researched into the use of QR codes and the platforms that are most suitable for them. One of them was television or moving image. It seems like a good idea but a lot of flaws always come into play, and yes I know this has a more ‘viral’ vibe about it, making the user dig and scrape around to find scraps of information. The main problem was the platform moving image and more specifically Youtube.

The problem with using QR codes on Youtube is the inability to accurately rewind. This crated such a nightmare to be able to actually get the QR code up clearly for the length of time needed in order to scan the code. Also, why should I invest my time in scanning the code for a trailer that looks like it’s going to lead to a bad movie? Anyway I did.

For those who couldn’t manage to scan or do not posses the ability to scan the QR codes can see a link below which leads to one of the many codes. All you need to do in order to see all the QR codes is just change the code number in the URL and you’ll be linked to a different image.

The images provided are a mixture of in film screen shots and parody posters of famous brands. I don’t know if it’s just me but I’ve seen so many posters, films, programmes that have all done similar things to this before. Since seeing Morgan Spurlock’s latest film outing The Greatest Movie Ever Sold, this kind of Sci-Fi romp couldn’t have come at a worser time.

After looking into the QR code use I can see now there is more of a viral campaign that has come out of it to ‘crack the code.’ I really could not be more bothered to do this as the film looks like a joke. Either way I guess this is a ‘fun’ way to hide a message

In all it’s nice to see QR codes integrated subliminally as it relates to the films subject but again, QR codes are not really a good idea when it comes to moving image. Anyway, the films looks like a bit of a ‘laugh’ but the message has already been broadcast many times before…advertising is evil…yawn.