Posted on January 6, 2011 by antonyjwhite

Well another blinder of a day! Busy, busy, busy!

So many people have been involved in the last couple of days set up for the 3D story telling conference at Ravensbourne Institution, and there has been some really amazing work going on, everyone has been giving it there all. I didn’t get home until 11pm tonight and feel zonked, needing to rest up for a busy day tomorrow with an 8am start.

Well today was interesting I arrived in the early afternoon as I had some project work I really needed to get done in the morning. The projectors were polarised and the 3D gaming had been tried and tested. It was looking goooood! Only problem was the projectors still needed a bit of tweaking in order to be perfect, this was not the case in the end. The projectors needed a lot of calibrating, A LOT OF CALIBRATING!

Anyway, I watched how to set up the LAN connection for the gaming yesturday but didn’t really know what to do at the time. Today I shone! I was asked to sort it out and I somehow recalled something that I thought I didn’t learn, was really good to fix the problem of getting the two computers to play against each other. I’m also happy as I will be having to sort that out all day for the next 2 days, so its good to get it drummed into my skull at this point.

The best job of the day was…sticking carpet together with gaffa tape, brilliant! 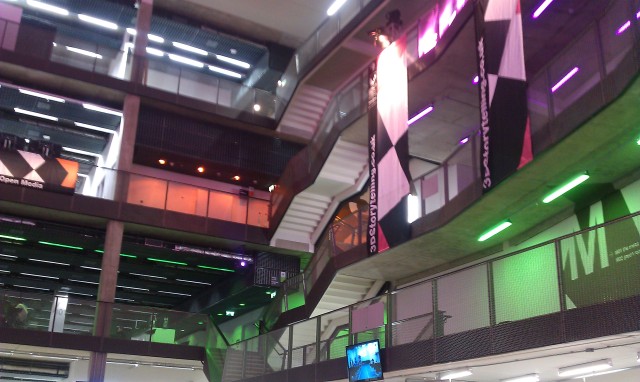 I originally saw the way finding for the 3D story telling on a board that had lots of big blocks of colours on. I thought “whats the emphasise on these colours, its a bit much” but now today i realise each of the floors were lit up relating to the signage around campus. All you need to do is look up and see the floor really clearly lit up, i thought that this was a really good idea and adds a new dimension to way finding. It also makes the atrium look rather impressive all lit up.

Another job was helping shift around projectors for calibration and to look at the screen while calibration was taking place. CALIBRATION IS THE PROCESS OF LINING UP BOTH OF THE PROJECTORS TO CREATE THE 3D IMAGE. THOUGHT I’D MENTION THIS AS IT WAS MOST OF THE DAY! This meant by the end of the day I felt a bit rough due to my eyes being placed in a roller coaster of light direction.

In all today was busy and tomorrow will be rather mental! Heres to another productive day, night night!

This entry was posted in My Progression. Bookmark the permalink.